Citizenship Question Threatens the Integrity of the Census 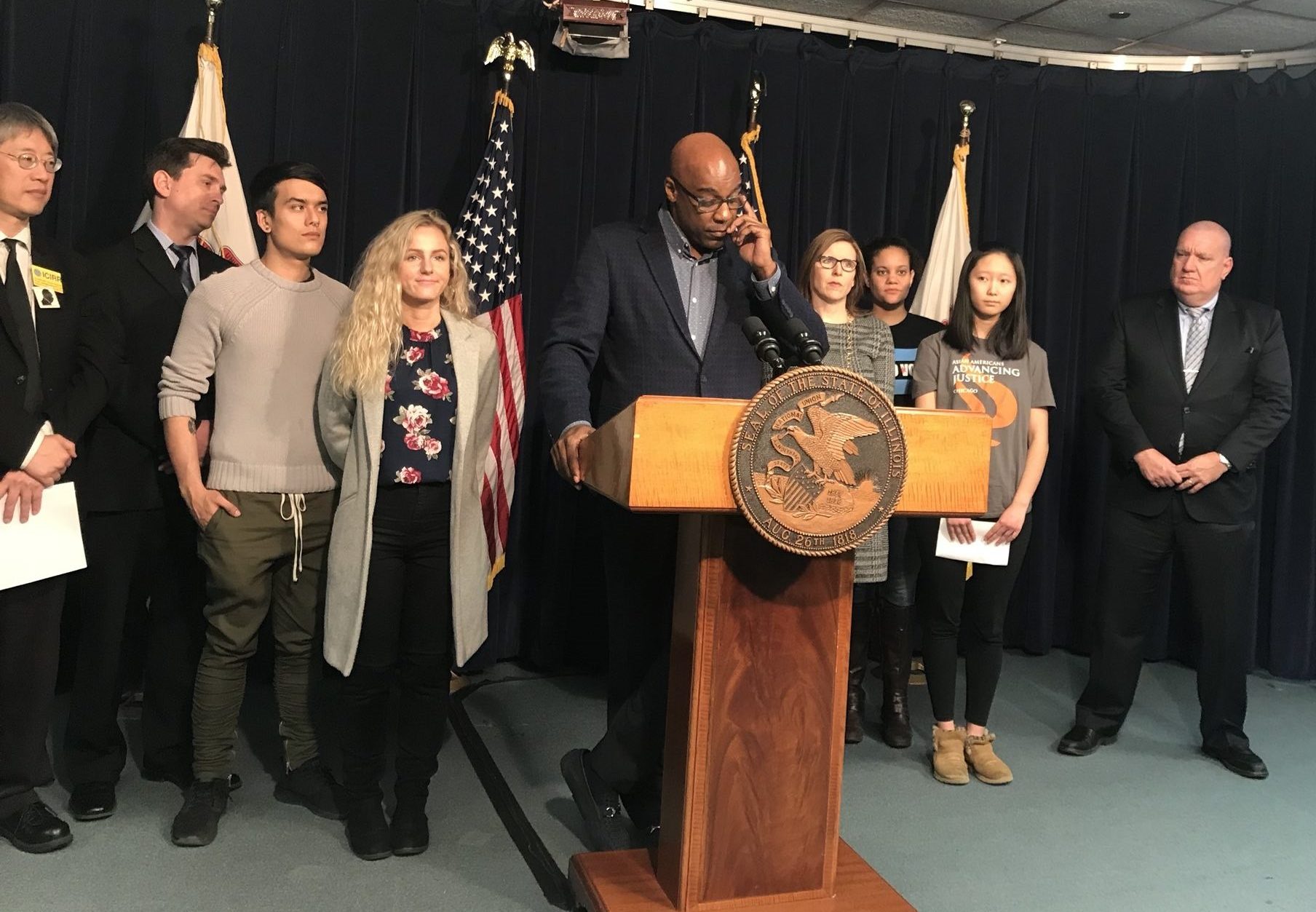 On Thursday morning leaders from Indivisible Chicago, the ACLU of Illinois, the Illinois Coalition for Immigrant and Refugee Rights, and Asian Americans Advancing Justice joined Illinois State Sen. Kwame Raoul and State Rep. Ann Williams, in opposing the U.S. Commerce Department’s decision to include a citizenship question on the 2020 census.

Last month Raoul and Williams introduced a joint resolution in the General Assembly urging the Commerce Department, which oversees the Census Bureau, not include the citizenship question. The move came in response to the U.S. Justice Department’s request in December that the item be added to the census forms after being absent since the 1950 census.
The resolution echos opposition voiced in a letter sent by Illinois Attorney General Lisa Madigan and 18 other state attorneys general and the state of Colorado to the Commerce Department in February.  The letter explained that the inclusion of the item causes a decrease in participation by immigrants and would directly threaten states’ fair representation in Congress and the Electoral College, as well as billions of dollars in federal funds that are distributed according to population. However, the Commerce Department said on Monday that Secretary Wilbur Ross had determined that the citizenship question would be included in the 2020 census. California Attorney General Xavier Becerra immediately filed a lawsuit on behalf of the people of California to overturn Ross’s decision.
Now at least 12 state attorneys general have declared their intentions to sue the Trump Administration as well, including Madigan on behalf of Illinois.

“I applaud California Attorney General Xavier Becerra for his swift and decisive action to block the Trump Administration’s attempts to suppress and undercount immigrant and minority populations in the 2020 census, and support the pledge by Illinois Attorney General Lisa Madigan to join other state attorneys general in court to preserve the integrity of the census,” said Raoul, at the press conference on Thursday morning.

“All of the facts show that the only purpose of including a question about citizenship in the census is to intimidate and disenfranchise immigrants and their families. As a son of Haitian-born immigrants I know first hand the struggle these populations face. We cannot allow Donald Trump’s racist agenda to manipulate the census and exclude minority populations. I fought to pass the Voting Rights Act in Illinois and will not stand idly by and watch it violated by the President and his GOP supporters.”

A lot is on the line when the census is taken every ten years. Population data are used to determine where federal funds are spent and how congressional districts are drawn, among other government policies. It is the basis for allocating the number of Congressional seats for each state and how nearly $700 billion in Federal funds are distributed to the states for everything from Medicaid to transportation funds.
The legal parameters of the Census are based on a count of the entire population, not just US citizens. Adding this question will build on an historic undercounting of minority populations, as it will discourage undocumented residents from completing the Census form. The result will be to shortchange diverse populations and their communities—which generally are the nation’s largest cities.
“Those who doubt this move by the Commerce Department is a cynical, politically-motivated action, need only to review fundraising materials mailed last week by a joint fundraising committee for Trump’s re-election campaign and the Republican National Committee,” said Jeff Radue of Indivisible Chicago.

“This appeal clearly aims to capitalize on efforts to suppress voting rights and reduce Federally-funded services to minority communities. Here, and across the country, the impact of this politically-driven decision will be felt for decades to come.”

On March 20, Raoul won the Illinois Democratic Primary Election out of a field of eight candidates and will appear on the November ballot as the party’s nominee.  As Attorney General, Raoul said he would vigorously pursue this case in court and lead efforts in the future to stave off attacks by the Trump Administration on the rights of the people of Illinois.